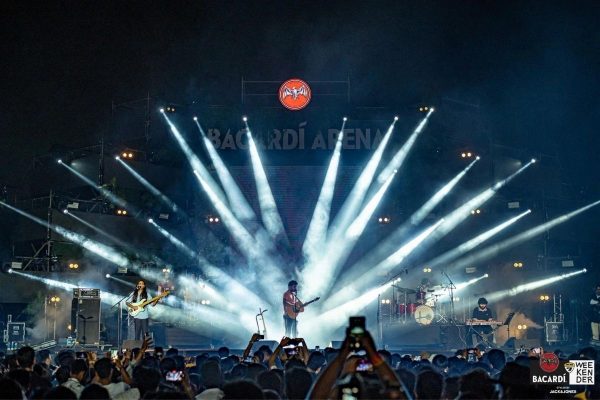 Pune: March 28, 2022 – NODWIN Gaming, one of the world’s leading esports companies and BACARDÍ have successfully wrapped up the 12th edition of the Happiest Music Festival – BACARDÍ NH7 Weekender! Held at Pune’s Mahalakshmi Lawns, the multi-genre festival was attended by thousands of fans from Pune and other cities.

Headliner – Prateek Kuhad had the audience mesmerised with his new release ‘Just A Word’ from the album ‘The Way That Lovers Do’ during an incredible hour-long performance, while ‘Rap Queen’ Raja Kumari created a unique setting with a live band for the very first time. The curated set by Ritviz saw an elaborate set-up that included an orchestra, dancers, actors and much more who performed his very first story-telling based act at the festival.

This year, the festival had 4 arenas and 5 stages with the BACARDÍ Arena hosting the main BACARDÍ stage and the Jack & Jones stage whereas the Casa BACARDÍ arena had the Casa BACARDÍ stage along with Red Bull Off The Roof. These stages were headlined by artists like Prateek Kuhad, Seedhe Maut, Ritviz, Kayan, Raja Kumari, Yung Raja, Ankur Tewari and many more, who performed never-seen-before sets created only for the festival. The stages and arenas were carefully curated to offer the audience 7 hours of non-stop entertainment each day. Tinder was back this year with Camp Tinder that hosted acoustic sets by artists like Kamakshi Khanna, Kayan, Osho Jain and Ankur Tewari, who set the vibe to close the evening off.

“It’s a wrap! And what a great way to bring together the community again to share a common love for music, comedy, and gaming. We are delighted to have been able to pull this off successfully after months and months of hard work put together by our teams and partners. I’d like to thank each and everyone who has taken a leap of faith despite the odds and worked tirelessly to make this event a super-duper success. A special shout out to the audience for their trust in us. We now look forward to taking this party across our other 9 City Takeovers in April,” said Akshat Rathee, Co-Founder and Managing Director, NODWIN Gaming.

“It was an unbelievable experience to see BACARDÍ’s core spirit and ethos come to life. We were back on the ground after two years and it was simply a delight to see the audiences do what makes them happy again and groove to the enthralling performances by a stellar lineup of artists. BACARDÍ has always kept consumers at the heart of everything we do, and we are now equally pumped to take the happiest music festival to 9 markets with our City Takeovers, bringing consumers the best of music, culture and comedy closer to their homes,” said Sameeksha Uniyal, Brand Lead – Brand BACARDÍ, India and South East Asia.

Entertaining the crowd in between performances, was the Bazaar Arena which had food and merchandise. Another highlight was the custom-curated cocktails that were specially created for the festival and served at the BACARDÍ bars. The first 500 attendees to enter the festival received exciting Jack & Jones goodie bags. The brand’s pop-up store also displayed its latest collection and the crowd kept pouring in to shop. Mia by Tanishq was associated with the festival for the first time and offered Virtual trials of trendy and contemporary Mia Jewelry using AR that the audience could test while enjoying the popsicles specially created for this lounge. The festival also had multiple aesthetic and creative installations for people to enjoy as they went from one arena to the next.

The festival also supported several initiatives like ‘Access For All’ who were the accessibility partners for the differently-abled; ‘6 Degrees’ the inclusivity partners for the LGBTQ community; Culpable who provided the audience with reusable glasses; and Butt Ballot who made recycling fun by asking a ballot question with every cigarette butted in the smoking zones. The festival also brought back the long-standing association with ‘Skrap’ who were BACARDÍ NH7 Weekender’s sustainability partners this year again. Scrap recycled every bit of waste at the venue, right from the food to the stage materials.